John King And The Mud River Revival And Keith Hurt At Rib Lickers. 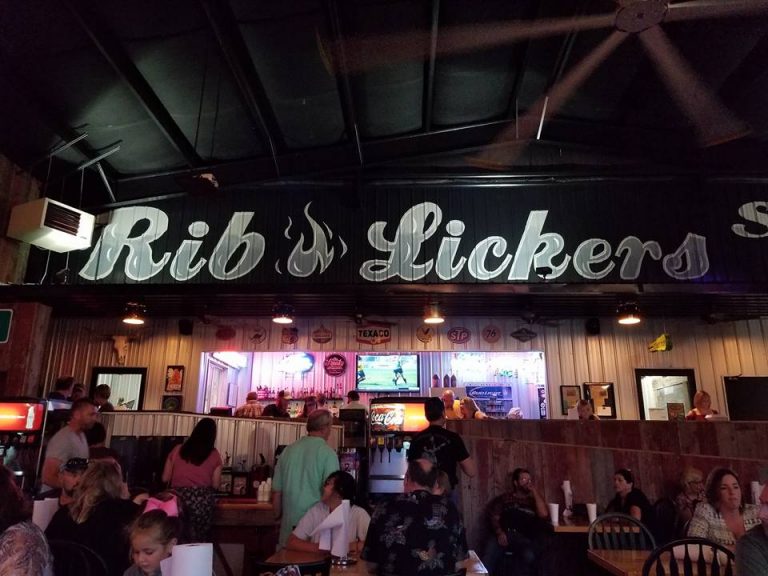 Tonight I am in Glasgow Kentucky at a popular local place for great food and music called Rib Lickers that has been on my bucket list for a year now, every time something comes up I want to cover I am always busy elsewhere or have to work my regular job.

I had VERY HIGH initial expectations for this establishment, and many of them were met. Only two of my expectations failed miserably, and I am currently working with management to help correct that problem. The parking was ample and plentiful, and the overall appearance of the whole theme is amazing.

The huge name above the bar there is a great call to action and the patrons flow through the place pretty well, however when I located the party I was sitting with I waited a LONG TIME before realizing you order with a   cafeteria style separate room to obtain food. This operation is NOT explained in any way so if you have never been there please know you’ll be sitting there puzzled like I was how to order food.

But when I finally did get food I’m here to tell you it was BEYOND good, it was downright scrumptious. The portions were BEYOND enough and the hash brown casserole was some of the best I have ever had, I would have that for a meal alone. I’ve never seen a baked potato that large before, and also the ribs were indeed good. Overall I was quite satisfied with this one, I would suggest it to anyone.

You might remember last month when I covered a songwriter’s night at another Bowling Green bar, when I covered this GREAT writer named Keith Hurt and his arsenal of Blues infused music. I’m telling you people this man is a damn juggernaut up there pounding away on a guitar, and he has a voice of wisdom, full of eccentric cover songs that are VERY enjoyable.

He ranges from Bob Dylan to Tom Petty to Waylon Jennings and Gene Watson. I mean this man is just a nuts as I am for music of old, and true well written tales of original grandeur. So I asked him just a little bit about his set list and this was some of the info he gave me:

“Rolling Down” is actually a Doc and Merle Watson song off of the album “Look Away”. It Is written by Eric Von Schmidt and I loved it since I was a kid. I made up a couple of verses at the end about where I grew up in Big Meadow. “Rambli’n on my mind” is My take on Robert Johnson’s classic song. “Be Somebody” is mine. It’s about someone I know who has burned every damn bridge they stepped on trying to be something they’re not.

He covered a Jason Isbell song as he prominently displayed his love for this new insurgence of Americana Music that is on the brink of flooding the mainstream market. I’m sure glad this man is on the side of real music! “Be Somebody” is mine. It’s about someone I know, who has burned every damn bridge they stepped on trying to be something they’re not.

That there is Mr. Mike Bulle he is the lead guitarist for a local band that garnered a spot on my TOP 50 of 2015 called John King And The Mud River Revival which frequents the Bowling Green area, along with many other great bands. They boast a special blend of Country and Southern Rock to make their own sound.

They played one of their originals called “Dutch Creek” from the brand new original album called “Hard Lessons Learned” that I’ll talk about on this article here. It’s more of a solo album for Mr. John but most of the band played on his album.  Also  from that album was the song “Nursing Home” that was penned by Mr. Pat Haney, I got to haer that song for the first time ever from the songwriter series that Mr. John did with Pat Haney and Rye Davis.

That is the latest album from him and you can purchase it by clicking on the band name up there and directly from their website you can order it. I’m going to include MANY videos from this performance on here for you to preview the music.

They covered “Folsom Prison Blues” which allowed Mr. Mike to display some wonderful lead guitar skills because I can vouch for his driving skills, he is a GREAT chauffeur for my festival work. That man has made MIRACLES happen for this website and I cannot appreciate him more. “Ring Of Fire” was another great cover they played tonight.

“Nowhere Kentucky” was next from their debut album, along with “Veteran”. They played the Leslie Satcher penned song “Troubador” from his 2008 album of the same name. Then they played the first song that I shot video for called “Free To Leave”.

They played the John Prine song called “Paradise” because Mr. John was raised around the that same area, and influenced heavily by songwriter John Prine. After playing “Highway Junkie” they played the next song I shot video for and that was one of my favorite songs they play called “Man On The Mountain”.

“Grandpa’s Guitar” was written about his own grandfather (not to be confused with Whitey Morgan’s song of the same name). He played a left handed guitar upside down which is HARD because I AM left handed and ALL of my guitars were ordered special.

They played Mr. Jamey Johnson’s song “In Color” that was one of the most popular songs of the decade as well as another GREAT song he played at the songwriter night called ‘Heaven Gained Another Angel”. They played another off the new album called “Ghost” before closing with another favorite called “Drag The Green River”, and the Lynryrd Skynrd classic called “Gimmie Back My Bullets”.