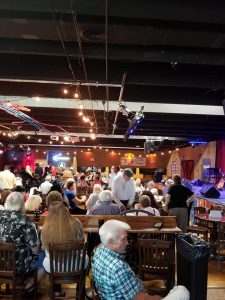 This year the R.O.P.E. gathering moved from the Shriner’s Temple to the Nashville Palace, This for me is the ULTIMATE fan club party. Sadly I just don’t get to come visit as often as I’d like to however when I can, baby it’s on! You basically wander around and get pictures, and hear stories of days long past. This is the largest music business internal function of it’s kind and I feel that we as young people need to preserve and continue this function. This function is integral to the continuation and preservation of Country Music as a whole.

R.O.P.E. stands for the Reunion Of Professional Entertainers and was started  by a bunch of industry people to make an effort to have a purpose for everyone to gather an catch back up. The music industry isn’t exactly like most people think, and it isn’t a big huge party where they all hang out at each other’s houses and drink. Everybody is usually busy and touring and recording and also doing shows, so this is a chance to ease down and enjoy some brotherhood.

Bill Anderson is signing his book he wrote with Pete Cooper and it highlights his career that spans almost sixty years, to which he has written and published literally hundreds of classic Country Music songs. He has contributed to Country Music more than pretty much anybody alive I could name that is alive today.

Country Music is alive and well here at the Nashville Palace during Fan Fair with one hell of a gathering here today, with the likes of Leona Williams, Dallas Wayne, Jeannie Seely, Melissa Luman Phillips, Bobby Lewis, Dickey Lee,Tommy Cash… man I could go and on…..they are all here right now.

After the usual Whitt’s Barbecue meal they serve before the music begins and prayers provided by the President Billy Henson we had the music commence and were treated to a very touching rendition of “America The Beautiful” from one of the steel guitar’s finest players Mr.Ron Elliott. Mr. Ron played with Stonewall Jackson and many more, and he is truly one of the instrument’s finest Legends. I plan to contact him in the near future for an interview in my “Steel Guitarists Along The Road” series, where I interview different steel players and you can see them HERE.

Country Music artist Mr. Bobby Marquez  graced the stage today with his song “She’s Not From Texas, She’s From Heaven”. He played his song  that George Strait recorded for him several years back that is a beautiful waltz, and he delivers it with such sincerity that who couldn’t enjoy it.

Next, Mr. Bobby played the song “Complicated Woman” that was written by The “Georgia Quacker” Mr. Gerald Smith and Mr. Buddy Owens. He closed his portion of the show with an acoustic song called “The Cowboy Way”. What a treat it truly was to finally get the chance to cover his music tonight on my website.

I want to take a brief moment to stop and THANK Mr. Keith Bilbrey for always emceeing these events and for his participation in my youth. If you are reading this, you and many others pretty much raised me Sir, and I’m truly thankful for that. Country Music is ALL I know and ALL I’m good at and I’m proud of that, YOU and ALL of these Legends were a HUGE PART of my childhood and my teens. Also Miss Leslie Ann Elliott for her role in R.O.P.E. and what she does for this function, she always lets me order a ticket and pay when I get there. As you know I was on the road in K.C. doing work for Moe Bandy and Dale Watson at Westport Roots Festival.

Folks I have covered the lovely Miss Mandy Barnett many times on this website but tonight it was VERY special to get to cover her at this type of event. She opened with a Hank Thompson classic entitled “Six Pack To Go”, from 1960. She followed that with two classic Patsy Cline songs, which as you know she often portrays Miss Patsy Cline in plays all over the nation. “He’s Got You, and I Fall To Pieces” were two Hank Cochran songs she did, followed by a song by the great Mosey Lister called “Where No One Stands Alone.

Country Legend Mr. Tim Atwood the piano genius made one of my Top 50 Albums of 2015 in years past with his album “Buy This Piano A Drink”. He is indeed a veteran of the Grand Ole Opry of many years of house band service before he wrongfully let go. “Don’t The Girls Get Prettier At Closing Time” was his opener along with his piano medley including ” Behind Closed Doors’ Blueberry Hill and Last Date”.

He played one really funny one called “Retired” and one called “Mom” before he went into the ever popular classic “Amazing Grace” and he closed with his song “I’ll Stand Up”.

Country Legend Miss Jody Miller has been silent for many years however today she finally gets credit on this website and it was truly a pleasure to cover her classic songs like “Down To The River” and her answer song to Roger Millers “King Of The Road” and that song is called “Queen Of The House”.

Her crown jewel song in my opinion was “Long Black Limousine” and another answer song to George Strait’s “All My Exes Live In Texas” and that song was called “From Your Exes Down In Texas”.

Finally we had Mr. Rex Allen Jr. Son of Singing Cowboy Legend Rex Allen, pretty much the last of the Singing Cowboys of the silver screen era. Honestly this part of history fascinates me and I study it often. “It’s Over” was one of his first songs along with “Looking For Lonely Street”.

He told us memories of his filming over one hundred episodes of the Statler brother’s television show, and how he had to write his own father a check as well as Roy Rogers to join him in recording the song called “The Last Of The Silver Screen Cowboys”. He closed his set with the ever popular hymn “When The roll Is Called Up Yonder”.

I always have a wonderful time at this function and I always enjoy spending time with the people involved with this scene as well as all of the ones I am involved with. I plan to continue covering the music they embrace here and we need MORE young people to become involved with these fine Legends.