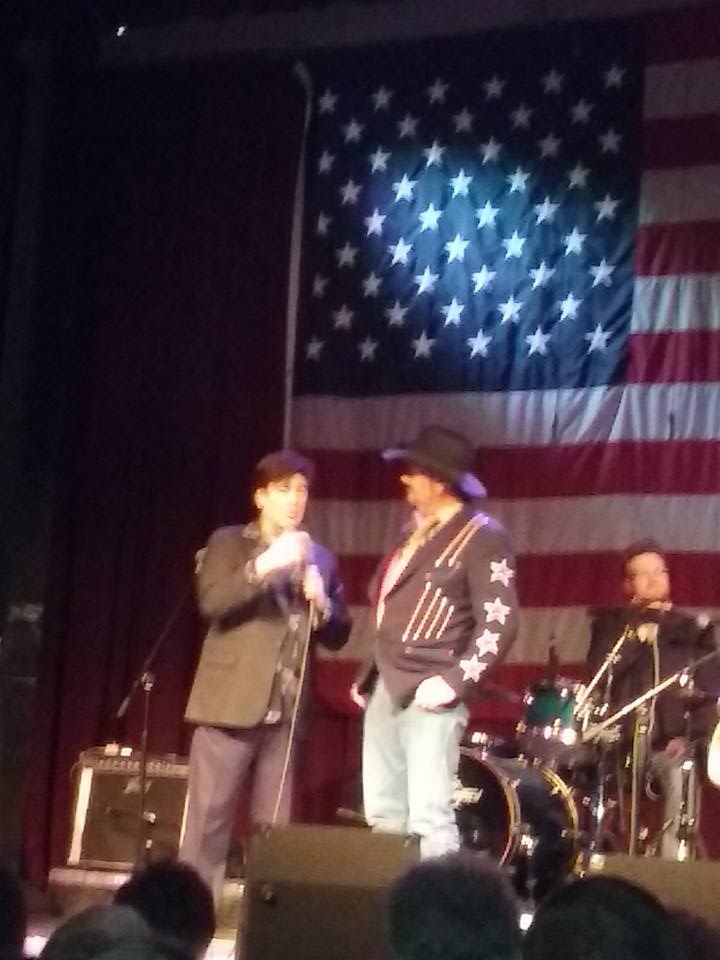 Last night I had a very unfortunate thing happen at the Nashville Palace, for the FIRST TIME EVER I was misinformed (of my own fault) of the start time at 5. I got there at 7 when they were signing autographs and the show was packing up, and needless to say I felt like a total boob. In my defense I have been incredibly busy on many different factions of Country and Americana music all across this nation. I know literally thousands of managers and bands, I’m familiar with more songs than I could write down, and I’ve spent time in more green rooms than in my own living room.

Bands understand my friends understand it’s NOT EASY to do this gig here and even I miss the bulls eye on some shots, BUT FOLKS HAVE I GOT THE GOODS FOR YOU. So today we are going to touch on many things from the 70th Anniversary of that good old Midnite Jamboree hosted this week by Ronnie McDowell along with his guest Richard Lynch. As always Miss Jennifer Herron did a wonderful job as the announcer behind the podium that does the commercials where they play albums available at the Ernest Tubb Record Shop downtown. In fact not too long ago I wrote an article on Country Legend Jeannie Seely who shall be hosting it on March 4rth. Additionally they played a new boxed set of Jimmie Rodgers that just has been released, and E.T. was responsible for the lot of his recordings being made available to the public.

Of course Ronnie McDowell opened with his classic hit “Older Women”, and went in depth to explain all of his hits as he performed them. I really learned a wealth of information from this hour and a half of music, additionally I was truly entertained by his charismatic stage presence. He followed that up with his follow up song called “Watching Girls Go By” which garnished over 1 million radio plays.

He introduced his band as Billy Joe Royal’s piano player, the Legend himself Doyle Grisham on steel who is a Coral Reefer Bane member and recorded such classic hits as “Margaritaville”, as well as Mr. James Ducher who also plays for Jimmy Buffet. His son Ronnie McDowell on the drums (who was introduced as being from his house) and “Eddie” on bass, Eddie played for Roy Drusky, Jack Greene and Stonewall Jackson.

“Bringing It To You Personally” was next before he embarked upon another one of his stories about someone he is a BIG fan of, Elvis Presley. In 1954 shortly after Hank Williams died Elvis debuted on the Opry and was approached by Ernest Tubb, who was told it’s OK to be different. He was invited to play the Midnite Jamboree on Broadway, so they walked through Tootsie’s bar into the Record Shop where he performed the Jamboree. Guitarist Scotty Moore said every year that predeceased this event Ernest Tubb sent Elvis a Christmas Card until Elvis passed away.

In 1984 the song “Ruin My Bad Reputation” was at number 1 and that was his next offering as he went into a story about approaching Ernest Tubb’s bus as a young man. He elaborated to E.T. that he did a little of him in his show in a song where he did him and, Cash, Marty Robbins and Hank. He went on to ask if E.T. minded to which he replied “Hell No son, I wish you’d do my entire show”. Another reason I enjoy Mr. Ronnie and all of the many stories he touches on much like Billy Don Burns and people of their Ilk.

At that juncture he brought out Richard lynch to perform their new song that they just cut called “Love Tattoo” which derived from a poem a friend of his wrote in a hospital room. Mr. Richard turned it into a song and I’ll be including the video in this article prior to editing. I’m also going to embed this video of his future work with Bluegrass Legend Rhonda Vincent that his management brought to my attention.

So now then my friends going back to Mr. Ronnie’s command of this stage tonight he performed his 1979 hit “Wandering Eyes” with precise dignity and grace. He just absolutely OWNS the audiance during his shows and caters to US as individuals. He becomes connected with you as a fan, singing in the aisles and as he 1984 “Tied Up Baby” that went to number 2.

In 1985 he rleased a song called “Make Love To You In A New York Minute And Take My Texas Time”. As he went into telling us about his 8 years of opening shows for Conway Twitty with his THEN band the Kentucky Headhunters he performed “It’s Only Make Believe” which was written by Jack Nance. He recorded it with a portion of Conway Twitty doing parts of the song included in his own.

“If Only I Could Paint The Way I Feel” was a song that gave him the opportunity to tell us about his painitngs like the famous one he painted of George Jones getting his DUI on the lawnmower. He included his story of how George called him on Christmas day to bring it over to him and the spent the holiday together, and George stared at it for 30 minutes. Also this set included his 1984 hit “Bringing It To You Personally” before he went into a beautiful closing song written by Mickey Newberry “I Wish I Was In Dixie”.

All in all this show was truly a blessed time at an iconic venue for a wonderful cause tonight. I need to focus more on some of these future performances like the Riders In The Sky and MORE hosts in the future here. This area remains vibrant with Honky Tonk music and boasts many great places to have a few beers and some good food. I don’t care what anybody says about this area I remain positive about it and enjoy going over that way!