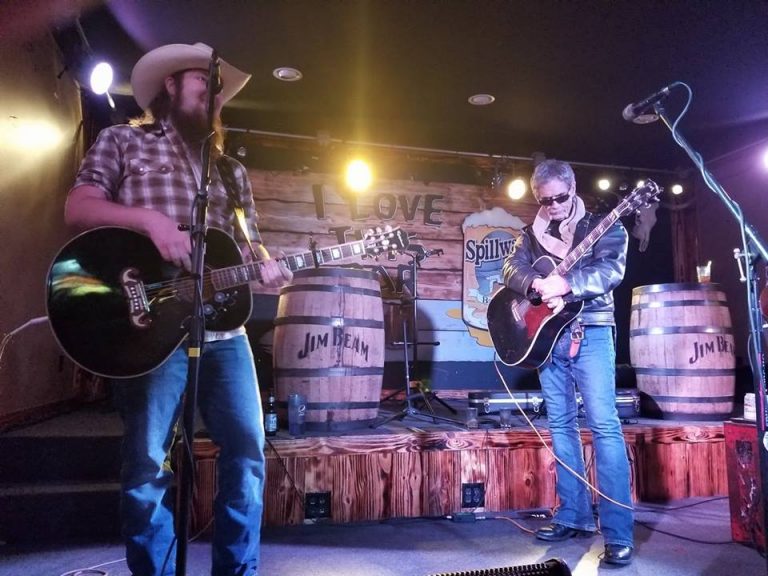 Once again I’m enjoying those wonderful Spillway Wings on a rainy Sunday evening, in order to watch David Vaughn Lindsay, Billy Don Burns, and Mr. Austin Lee. You know I have always raved bout Spillways food and shows, so if you haven’t been there please make it a point to hit a show there.

Basically what happens are the artists swap out turns playing original songs they wrote on an acoustic form, much like the time I covered John King And Others in the past. Much like the fashion I have covered the others in, I will be writing about each of the artists on their own sections.

Mr. Austin Lee is based out of Nashville and is originally from Mississippi, just starting out on the touring scene, having booking some shows with my Texas with my friend Miss Emily Erwin and her company,  and is about ready to do a three week stretch. He opened his set with a song he wrote at seventeen called “Reckless”. He continued his set with songs like “Let Go”, which was a solemn song about heartbreak.

The third song he played I took a video of and it called when you came around which sadly JUST GOT erased. I publicly apologize for this. He followed that up with a song called “Jessi” which was about Jessi Colter and Waylon’s love story. It was a very nice waltz song, most of his original songs are easy to understand and quite catchy.

So after the break they began another round and he began with a song called “Too Damn Long”, and talked more about his upcoming tour. He is now talking about his title song of his tour called “Betting Away My Life” which was his next song. He moved here on November 26th 2016 and has been here fourteen months.

His last song of the night was called “Drive” where he talks about a young boy waiting to drive.  I honestly think that was the best and most well written song that he played tonight. I wish him much luck out there in the next few weeks.

Mr. Billy Don Burnsis a Legend that sadly I haven’t had the chance to run across as of late, its been a few months since we crossed paths. But when we do its always just like magic, the stories and the history that his songs embellish are timeless.

He spoke with so much authority and history I think the entire bar was entirely captivated. The stories he told after some of the songs were amazing, including the first one about getting out of the halfway house to play that Kentucky show.

He played the song called “Is it The Singer Or Is It The Song” which he stated that he played on the Opry with Shooter and Jessi Colter, and Shooter had asked him to play that song. The next song he played he said he heard on the radio in a cab that Whitey Morgan cut called “Memories Cost A Lot”.

He is right now telling us about the project that fell through about trying to record Paycheck in prison, where the recordings got lost. After the break he played a song called Stranger, which is one of the songs I seldom hear him play live.

He played the title track of his newest album called “Graveyard In Montgomery” which is one of his more poignant songs he sings. It’s pretty much full of darkness and ghostly presences. He is closing out the evening with the song called Talk About Crazy, which is the name of his current tour. We don’t get to see each other often enough that’s for sure.

Mr. David Vaughn Lindsay is another man that I touched on many times and I don’t get to run into as often either. His first song he played was called Heathen. His second song that he and his guitarist played was called Na Na Na, basically he said he couldn’t find the right chorus.

The video I will be including in this article was a song called Fool Like Me and followed that by asong called Fightings What I Do. The big dog himself is up there playing some darn fine old Shot Time And Cigarettes songs, right now he is playing Sometimes.

The song Love To Hate was another older song that got played tonight, as he talked about the song Mr Colter wrote about him called Me And Big Dave. His last song was I cant Quit Drinking by Paycheck, he re wrote it and changed the lyrics a little with a soul tempo.

They WILL be bringing this series back to the monthly rotation soon, even though it was reported that Spillway will be soon closing on Sundays.