The Last Recording Of A True Bakersfield Legend. 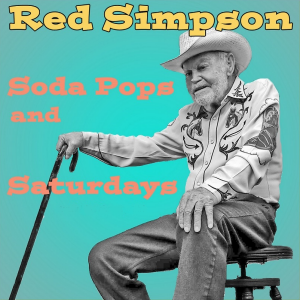 January 9th we mourned the loss of one of the most overlooked Icons of the Bakersfield Era of Country Music, Red Simpson. I have a few memories of him that I included in my article of him when he passed on. Much like Country Legend Mel McDaniel he left us with a piece of his legacy for us fans to enjoy before he died.

February 4rth he released his first new album since 2005 titled “Soda Pops And Saturdays”. This album features some never heard before songs that Red Simpson wrote and also some classic songs of his that he re recorded in 2015 for release on this album.

The song “Here In Frisco” is a song that was originally on the 1975 release “I’m Moving On”, which was a good song on this album and I have also heard Dale Watson sing it as well. Of course there were some really good Classic songs on this album like “My Name Is Red Simpson” and “Diesel Smoke”.

Red Simpson was actually quite active on stage up until late last year when he developed some heart problems and needed some heart work done. I actually heard he was healing well and it was quite a surprise to me that he passed away, it was sad because he had planned an epic concert at the Nashville Palace in Nashville once again VIA Muddy Roots.

HERE is where to order this album from Back Roads Records. And here is a complete track listing from the album that will also be available at the Crystal Palace.