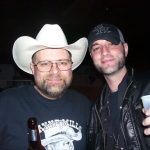 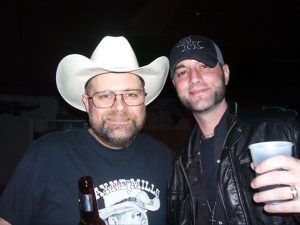 Last year at Outlaws And Legends in Altamont Tennessee I met so many people that
have now become like family to me. I cannot even begin to write in words what
they mean to me.
I met Mr. Chuck and Miss Diann and Mr. Marty shine sauce and Mr. Kenneth who
is a damn talented artist.
I met all the people involved with The Last Honky Tonk Music Series.

I been blessed and honored to be able to watch them ALL grow as
artists and songwriters.
And I have certainly been blessed enough to get to write these articles
that I do about them.

One person in particular I identified very well with was Joshua Morningstar.
I have wrote several articles about him and studied him extensively in the past
year. I know what he loves and what he dislikes..I know his style.
I know his background..I lived his background and when I hug him I FEEL his passion.
I love this man more than any other artist I ever met in 20 years of music.

I owe him a lot, in his album liner he did not forget me. In his song “You Dont
Follow Billie Gant” he again remembered me.
He has graced the stage with many legends like Billy Don Burns and Tom Ghent.
He holds true to the Legends like Hank Williams and can actually tell you
facts about him.

On the other side of this article…Joshua Morningstar has announced that on
Thursday Sept 11th at The End Nashville he will be joined by steel guitar
wizard Andy Gibson. Mr. Andy just previously ended his several year tenure with Hank Williams 3
(PLEASE do not ask or start rumors I have NO CLUE why)..RESPECT HIM!

Andy Gibson in my opinion is one of the finest producers of today’s day
and age within country music.
He produced “Fire And Hail” by the .357 String Band which broke ground for
Roots music along with Sarah Gayle Meech’s first album AND the second forthcoming
album.
He played steel on Hank Williams 3’s album “Straight To Hell” which defined independent
music as Hank was just being released from Curb Records and was beginning to show us
what was truly in his heart, and he continued on to play for several more of Hank 3’s
albums.
He played steel guitar for Bob Wayne on his latest release “Back To The Camper”.
He was mentored by Kayton Robert’s who played on Hank 3’s first two albums
and played for Hank Snow for over 30 years.

This is a show you DO NOT WANT TO MISS. Now honestly I’m trying
to get off for this show..but I cannot cover everything.
I am considering in the future of getting a helper.

Will there be MORE shows? I have no information right now folks.

One Response to “My Buddy Joshua Morningstar Plays Show With Andy Gibson: Tn”