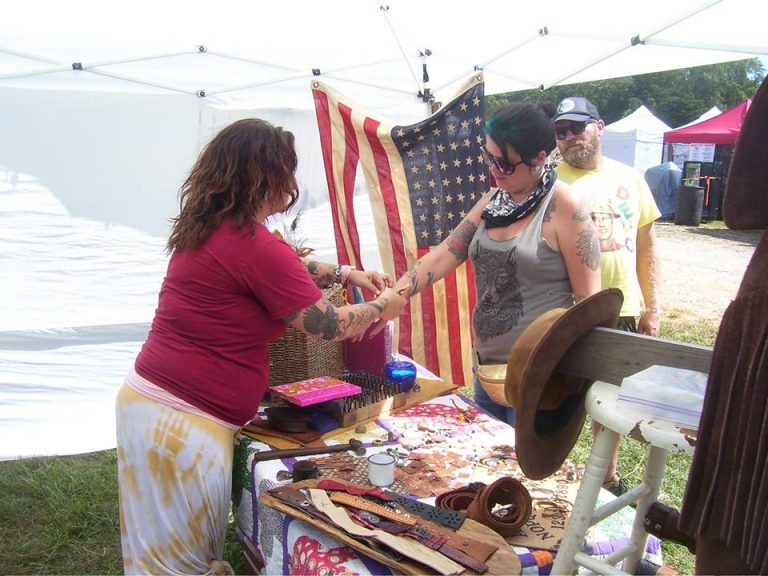 Folks by now I was absolutely immersed in my work for Muddy Roots now let me tell you that I often was hanging out in my friend Kristie’s vendor tent she runs a jewelry business called Rebelkchild and she often comes with me to festivals and helps me take pictures and runs for food when I can’t. She had a tent set up by Ellie Monster clothing.

The first band in this portion of my articles was a band I have often covered on here called Carrie Nation And The Speakeasy and they too hail from Kansas. I love these guys and their slam banging punkgrass with trumpets or whatever you want to regard it being as.

They played two new songs that are currently named “Gnowles” and also “Bowels And Constance” however it was stated the names might change or might stay that. The very first song they played that I noticed was “Anonimity” and they also played “OBIS” from their second album.

The last song I noticed from them as I had to go catch more was “Stop Believin'” from their first self titled album which is only available on vinyl right now.

Finally I get to cover Hackensaw Boys on my website I have had the opportunity to include them many times and situations kept coming up to where I could not make it. One of the main sings I remembered was “Flora” , many of the songs were played off their new album Charismo which is named after their world known trash drum set that gets dismantled and rebuilt over and over again and has been used from the beginning. This band has had a remarkable past members list and has revolved many times around, however they always come out sounding like champions.

“Content Not To Seek Thrills” and followed by “Ol Nick” were next. This band was quite possibly the best set at the entire festival accept for Del McCoury. I truly had a wonderful time watching them tear the stage apart., and it was cool Mr. Evan the bass player remembered me from West Virginia when he played with Mr. Joshua Morningstar.

“Happy For Us” and Wolves Howli’n” were both next and they quickly played right into “World Upside Down” which completely killed us tonight. They also played “Don’t Bet Against Me” and they included a song from their first album called “F.D.R.” and before their set broke up from that large of a crowd I had to sneak off to witness what was going at stage 3 again.

The Tillers play one of my favorite songs…ever…period. It’s called “Willy Dear” and if you get the chance LISTEN to the words. It was not included in tonight’s set list sadly. “Geroge Street Beat” was one of the beginning songs we got to hear along with “Unpainted Picture”.

The next song was a Woody Guthrie tune called “All You Facists Are Bron To Loose” which is an obscure cover song in my opinion. Another good song off Hand On The Plow was called “Shanty Boat”. The Tillers come from the Ohio area and have ruled the local bar scene for many years the present members include : Michael Oberst- banjo, vocal, fiddle, guitar, harmonica, kazoo, Sean Geil- guitar, vocal, dobro, banjo, mandolin Aaron Geil- upright bass, vocals Joe Macheret- fiddle, mandolin, guitar, vocals.

“Tecseamuh On The Battlefield” was next along with “The Weild and The Wild” and also included a song I’m not sure about what the name was but it was named after the Rabbit Hatch General Store that burned down recently on the Kentucky line. It was basically called “The Old General Store”. The Tillers never ever fail to amaze me on stage as they play their way into our hearts and minds.

Bonnie “Prince” Billy was amazingly not much older than me by two years and hails from Louisville Kentucky. He is well known for his do it yourself style of music and tonight he preformed a lot of Merle Haggard’s songs.

“Down Every Road” “Friend Of Yours In California” filled our ears as did the beloved memory of a Bakersfield Legend this night. Why I could hear the Norm Hamlet steel guitar licks on “I Always Get Lucky With You” wrote by the great Freddy Powers who also died this year from a long battle with Parkinson’s.

“That’s The Way Love Goes” and a really good song called “Old Pal Of Mine” followed suit in his set list tonight as well as “Some Of Us Fly Some Of Us Fall”. His presence up there and his demeanor was well beyond what I thought his age was. I had NO idea he was just a dab older than me and I truly enjoyed this man’s set. His last song was “Wouldn’t That Be Something”.

Two more acts in this series folks and they were both running over each other tonight so I caught most of the Reverend Peyton’s Big Damn Band blessed the Big Tent Stage tonight with their hard sound and hard lifestyle. I mean seriously this band plays 280 shows a year and travels their ASS off to provide us with music.

They come from the infamous Brown County area of Indiana where so many festivals take place that I deal with it’s unreal. As they played “Who’s That Knocking” and one called “Shut The Screen” this three piece band completely kicked our butts tonight and they had the tent just JAMMED with people. They were loud fast and hardcore up there without much talking.

“Front Porch Trained” meant he didn’t have any fancy guitar teacher or high dollar books to play this stuff he proclaimed I’m front porch trained and BAM he hit you in the forehead..so “Stomp Your Feet” and have “Two More Bottles Of Wine” before I throw the main deal at you people…a man that is revered as a Legend here at Muddy Roots that played last year.

The wonderful Del McCoury Delano McCoury is indeed one of Bluegrass most beloved and revered Legends left alive today within the high ranks of Appalachian Music. He began his own festival in Maryland called Delfest which still runs today.

He has played many many times on the Grand Old Opry and has contributed to all genres of music over and over again and I know he didn’t get along with Steve Earle but I truly enjoyed his album they recorded and I regard it highly. He began his set with two songs I didn’t catch as I was climbing the sound tower that Mr. Ronnie usually inhabits.

The very first song I noticed was “Hillcrest Drive” and then they played “Hard On My Heart”…easy on the eyes. They played many instrumentals like one they called “5 String Flamethrower” and “Foggy Mountain Breakdown”.

They dug deep into their many album list tonight as they played a staple song called “Blackjack County Chains” and another called “Nashville Cats” and “Run Racehorse Run”. What an absolute treat we were delivered tonight as he continued to play anything the crowd hollared out to him even played the “Tennessee Waltz” which wasn’t even his song.

“1952 Vincent” was indeed one of his signature songs as well as “Nothing Special” and one that came from a newer album called “Del And Woody” called “Corn Bread And Creek Water”. Much love and respect to Woody Guthrie out here this weekend as he wound down his set with “I Need More Time” I began to pack up the truck and make my way out of the festival to go back home, I knew it would take some time to say goodbye to everyone and gather up my things. I have one more final article in store for you folks and my Muddy Roots job is complete…stay tuned.